Why the BCP Beach Hut Budget is wrong

The BCP are proposing to set up a company to buy the BCP Council's beach huts. The plan involves a special purpose vehicle (SPV), which would be owned by the council, to purchase the beach huts in Poole and Christchurch, but no business plan for this proposal has been presented.

What does this mean to Beach Hut owners and local residents?

There is no plan to evict tenants or significantly change things.  This is about mortgaging the assets, and it is unknown whether or not the new ‘company’ will change any of the terms and conditions. 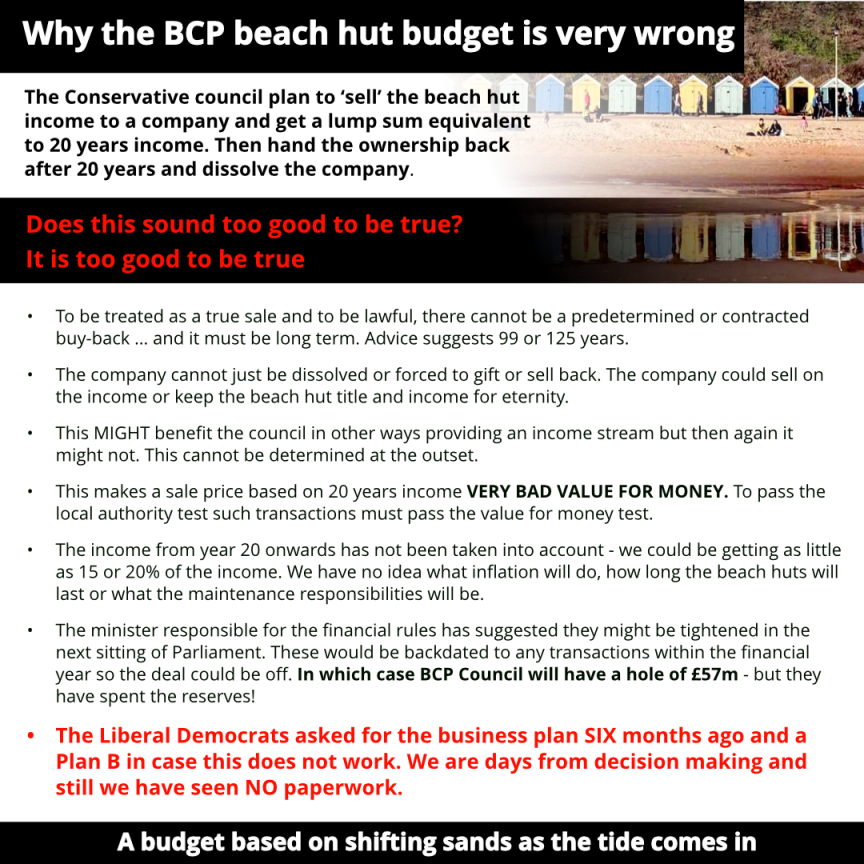 Reorganisation complexity of merging 3 councils into one

The council has to fund transformation following local government reorganisation and to deal with the complexity of bringing three councils into one (three years on we do not even have the same IT systems in any department, pay is not aligned and processes are completely different with services to customers varying depending on where you live).

This was calculated to cost around £37m but would lead to much bigger savings.

The Lib Dem administration was going to fund this in two ways:

FUCR means we were going to sell surplus assets and use the one off receipt to fund the programme; this is one a government approved method of dealing with this sort of thing.

The Tories described this as a ‘fire sale’ (and continue to do so at every opportunity.)  They pledged not to sell ANYTHING and rubbished our plan.

They took control, and then proceeded to spend wildly and used up the reserves.  They only achieved 1/3 of the expected transformation savings in the first full year and so there is much more than needs to be completed.

No money in the pot and pledge not to sell assets

Now there is no money in the pot, and a pledge not to sell assets.

They are also struggling to balance the main budget and so transferred £7m per year (£21m over the period of the budget) from wages into the transformation programme on the basis that lots of staff are doing things that are covered by transformation and this could be justified.

So why the beach huts?

The income from the huts nets down to around £3m per year, so the SPV would use this income to pay for maintenance costs, tax, guarantee fees and paying back the money used to buy the beach huts.

So they set up a company which would then have the assets transferred, in return for a lump sum of around £55-60m which can be used as a capital receipt under FUCR to fund transformation.

An asset can only be sold outside of the council.

No business plan has been made available

No business plan was presented so we don’t know what happens to the maintenance of the beach huts, the upgrades, the replacement costs over the next two decades, things like electricity, wifi and importantly the rent chargeable.

The company is not even going to be a wholly owned company.  It is described as ‘wholly or majority owned’ so we could see a private company, or beach hut owners, or a charity take shares….this could protect tenants but who knows – because no business plan has been presented and no consultation has taken place.

We were told that after 20 years the company would be dissolved and the beach huts would return to the ownership of the council.  But as you will see below this is not the case.

There was apparently a report from KPMG which showed how this would work, 6 months on – we have not seen it.

There has been advice given by the LGA – we have not seen it.

There has been support from CIPFA who deal with public finance – we have not seen it.

The assets have to be sold for this to be legal

There is a further problem.  The rules state that to be legal there must be be a ‘true sale’.  This means that it cannot be preconditioned that the assets will return, they have to actually be sold.  There cannot be a contract to buy back the assets, and it has been suggested that the ownership must transfer is the very long term as with a lease – this could mean 99 or 125 year.

So if this is the case, this is very bad value for money.  Why would we get 20yrs income at todays rates when the company will have the asset for 100+ years – what happens to the other 80% …

You will know that the public sector has a Value for Money (VFM) test, how can it be good value for money to sell something for 15 or 20% of its value?  Surely we must be getting 70-80% for it to present any half decent value for month?

If it is not good VFM then it cannot be recommended.

Rules around FUCR have been changed

It gets worse.  The Government has announced further changes to financial regulations including the rules around FUCR. One such change could make the whole thing outside of the rules and their annual accounting process means that if the change happens during the same financial year as the deal is done, it would have to be scrapped, restoring the £57m hole in the budget.

It has been suggested that because of the above, senior officers are now wanting to recommend this does NOT go ahead, but the politicians are pushing for it – they do not have another option as they have built the whole budget on this proposal.  This is probably why the papers are missing.
The agenda was published according to the law by the deadline of 23.59 on Tuesday.  But its literally the agenda, no report, no recommendations, no background papers, no advice.

I managed to get the deadline for public questions extended as it was not fair that the public couldn’t ask questions if they didn’t have the content. This has been extended to Monday.

But we still don’t have the papers, and as cllrs we are arguing that the complexity of this means that we cannot possibly deal with it unless the papers are issued today (still 3 days late).  If this does not happen we are calling for it to be pulled from the cabinet agenda for later this month, and pushed to the meeting in September with a new scrutiny meeting happening in August.

It is a total disgrace and even if it is pulled at the last minute it’s crucial that the public hear what a disgraceful proposal was being planned and how politicians have been putting pressure on officers to do things that are poor in so many ways.

In terms of the impact on beach hut owners, we are totally in the dark….they were promised a consultation, but then we were promised a business plan in the first quarter of the new year.