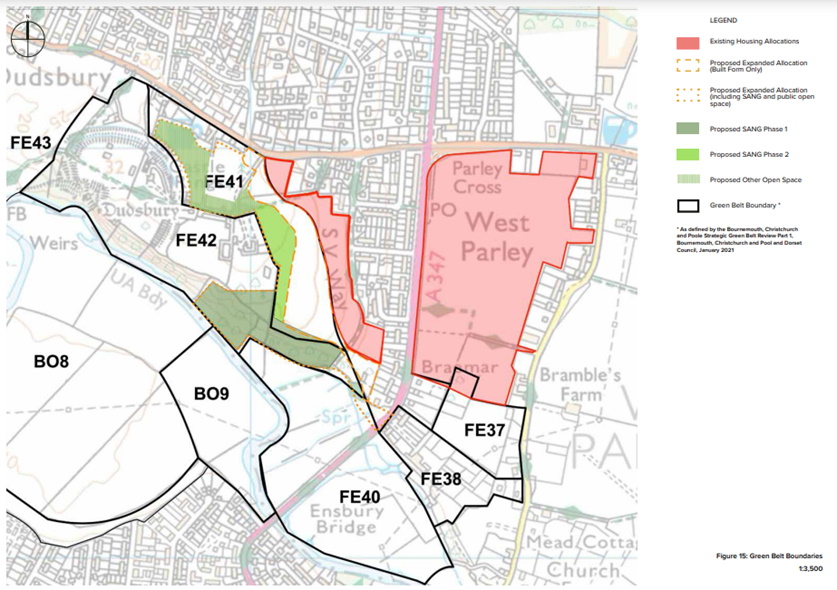 The 2014 Dorset Plan which guides development in the County, permitted the building of up to 150 homes on the Western side of New Road (South). The Planners originally wanted to give consent for 200 homes but the Planning Inspector reduced to a 150 after representations from English Heritage who felt the development would affect the landscape surrounding the Iron Age Fort.

Cala Homes, a subsidiary of Legal and General Insurance, have an option on the site which is best described as ‘mountain goat country’ due to the sloping terrain. Part of the requirement from Planners is likely to be the construction of an estate road to give access to the new development and to help relieve the bad congestion at Parley Cross. A similar requirement is expected for the new development on the Eastern side of New Road (South) to serve the 386 new houses, Lidl Store and small shops/offices around the Village Centre.

The Cala Site estate road is more expensive to build due to the terrain and they suggest construction costs of some £4m. In a recent presentation to the Parish Council, the developers indicated that to fund the estate road, housing numbers would have to be increased to 300 ‘high end’ homes. Dorset Council already agreed that no Community Infrastructure Levy (CIL)would be raised and no funding contribution would be available through the multi-agency improvement group for Bournemouth/Dorset.  This is the fund that paid for works near Bournemouth Airport.

The Developers have promised to hold a public exhibition after negotiations with Planners have been concluded. They anticipate submitting an application in the Autumn of this year. We have concerns that without both estate roads and further road alterations at the traffic lights, the congestion at the crossroads will continue. It is believed Dorset Council Highways department are of the opinion that a series of staggered traffic lights along New Road (South) and Christchurch Road (both parts) will assist the traffic flow.

This diagram was submitted by Cala Homes in response to Dorset Council’s emerging Local Plan.

The pink area shows the land already allocated in 2014, with the link road along the boundary.  The developer’s desire to expand the area of development at this site, would require additional greenbelt to be rolled back and thereby requiring an additional area of Suitable Alternative Natural Greenspace (SANG).  Obviously, the proximity to the ancient Hillfort will require careful consideration and Historic England will be consulted.

'We do not need more high end homes in West Parley, that simply drive prices higher and property ownership further out of the reach of families and younger people.  Unless we start building first time buyer and affordable homes we will create a timebomb in Ferndown and the surrounding areas.'

Find out more about proposed housing allocations in West Parley.